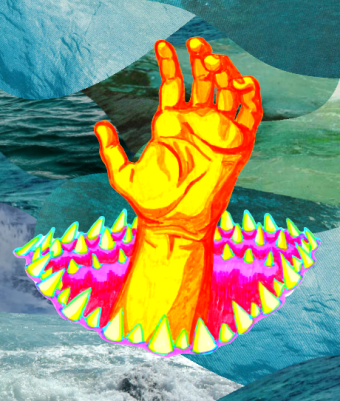 In my defence, I hadn't swam in the ocean in about two years, and hadn't swam in the surf in longer - almost four years to the day. Hell, I'm not sure I'd even been in a swimming pool in two years. I was out of practice. The way I actually got sucked out, I'd argue, wasn't entirely my fault. I ducked under a wave to avoid getting wiped out, and the moment I came up, another was about to crash down on me. So I ducked under that one, too. When I came up, I couldn't touch the seafloor. For a minute, I didn't think that was such a big deal, but when I tried to swim back to the shallows, I couldn't. The beach was manned by surf lifesavers, but I wasn't going to ask for help unless it was absolutely necessary. So, I kept trying to swim back to shore, and kept getting thrashed by waves, swallowing more and more seawater as it got harder to stay afloat. I'd never had to struggle to keep my head above the water.

I was embarrassed the moment I realised I was drowning, and the embarrassment tripled by the moment as I realised that if I wanted to live, I was going to have to call for help. I tried putting my hands directly up, like they tell you to in school, but as it turns out, when you're getting pummelled by surf you actually kind of need your arms to stay afloat. I considered letting myself drown just to save myself the shame and to save the lifesaver the hassle. But, it was a crowded beach. People - families, with young children - were swimming, and I didn't want to traumatise anyone. Worse yet was the mortifying possibility that I would lose consciousness, get rescued, and have to be resuscitated on the beach - if that happened, I thought, I would run directly back into the ocean and drown myself out of shame. So I called for help. Actually, literally, called for help, like a stock character in a newspaper cartoon. As soon as I could see the lifesaver approaching me between waves, it all became horribly real. I started apologising as soon as the lifesaver was in earshot, and continued until we were both firmly back on the beach and he was walking back to the lifesaver car. As I gripped the straps on the board and breathlessly told him that "I'm so sorry, thank you for this, I'm so sorry," I wondered if this was what people normally said when they were being rescued, or whether he was rolling his eyes at me.

Walking back to the towel, my mind raced to piece together what little Russian I knew, in hopes that if I spoke it loudly enough, I'd be able to pass myself off to my fellow beachgoers as a Russian tourist who'd never seen the ocean before. By the time I reached the towel, though, the only words I could remember were "YES NO CAT SOUP", the last of which was particularly unhelpful because the Russian word for soup sounds just like the English one. I was nauseous, and the only thing that could make this worse would be if I threw up. I was also frothing at the mouth for the first time in my life, although I couldn't tell you why. At the time, I thought it was some sort of reaction between saliva and seawater, but when I looked it up later it turned out that isn't a thing. The closest rational explanation would be that it was due to stress, but I didn't feel like drowning had actually caused me that much stress. I have a severe enough panic disorder that going to a large shopping centre probably causes me more stress than drowning did. Maybe it was fear - I didn't feel that scared, either, but maybe there's a difference between the fear in your brain and the fear in your body. Your brain can see the red and yellow flags, but all your body can feel is the ocean.

I wonder if everyone feels this much embarrassment when they have to be rescued from drowning in the ocean. I wonder if people feel this way when they have to call the fire brigade. I probably would. A house burning down is even more of a spectacle than being rescued by lifesavers. I watched a house burn down once. I was tired, unrested and dazed when the stinging scent of smoke, cruel and chemical, was carried through my bedroom window, stinging in my nose and throat. I went to where my mum was working at the dinner table we never ate at.
"Do you smell that?" I asked her.
"Smell what?" she replied. Her sense of smell had been fried by years of smoking, but the smell was strong enough that I was still surprised. I went out to the front patio, where I saw the source of the smell. Past the retirement home, and over the trees in the park, a broad wall of white smoke was billowing into the summer sky.
"Holy shit," I said, loud and flat like a town crier, "Something's on fire." Downstairs, I repeated this announcement to the rest of the house, who followed me back to the patio.
"That's a house fire, all right," said my grandma, "should we go and watch?" I protested. Surely it had to be frowned upon. Surely it was considered cruel to use something like that as entertainment.
"Rubberneckers are expected at house fires," Grandma told me, "When my house burned down, people looted. Watching is fine." Mum had no interest in coming. About thirty years earlier, the old worker's cottage where my grandma lived at the time had burned down in a fire which had started in the bedroom my mum had moved out of just a few months before. Most of her possessions were still in that house, and once, when I'd brought up hanging some sort of decorative fabric on the walls of my bedroom, she told me that the fire most likely started due to fabric she'd left hanging on the walls. Then again, my grandma, for whom the fire wasn't a traumatic destruction of a childhood home, will tell you that the fire was caused by a faulty clock radio.

We weren't the first people to show up to watch. In fact, it was the most people I'd seen outside in my neighbourhood at the same time. We stood across the street from the burning house. A family emerged from a nearby home, holding up their baby so that it could see. There were probably about the same amount of people on the street as there were on the beach when I was rescued, but the owner of the house wasn't home when the fire broke out, and still hadn't arrived by the time the fire died down and the crowd dispersed. Maybe she was hiding out somewhere, not wanting to be seen. The first thing which had struck me about the burning house was how much it looked like our own - two storeys, all rectangular and brick. As I lay on my side on the beach towel beside my mum, trying to catch my breath, all I could picture was myself standing by a fire engine as my house burned down. I saw firemen running in and out of the building as I stood by and said "I'm really sorry about this, thank you so much, I hate to be a hassle," to any one of them who was within earshot, diverting my eyes away from a crowd I couldn't bring myself to look at.